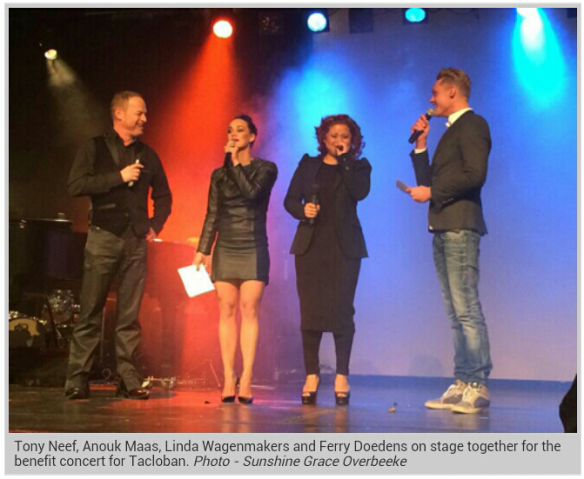 THE NETHERLANDS – In a night filled with music, dance and lively performances, former stars of Miss Saigon Netherlands and Dutch celebrities gathered to help the victims of Typhoon Haiyan in Tacloban, particularly the children.

The benefit concert dubbed as “A Future for the Children of Tacloban” featured performances by Anouk Maas, Ferry Doedens, Tony Neef, Linda Wagenmakers, Joanne Telesford and many others.

The proceeds of the concert will be donated to Help Tacloban Foundation (HET), an organization that supports school children in Tacloban, by donating study materials and in the rehabilitation of Capoocan Elementary School.

The concert was organized by theater and film actor Arvin Quirante who was part of “Miss Saigon” in the Netherlands and Barcelona. Although not born or raised in Tacloban, Quirante knows the difficulties that the children are going through after their families lost everything during the typhoon. He himself struggled with poverty when he was a kid.“Many of these children have been orphaned by Typhoon Yolanda, many have lost their source of income. Probably many are single parents. I can relate to this because my mother was a single parent and I understand their needs,” said Quirante in an interview with Balitang Europe. 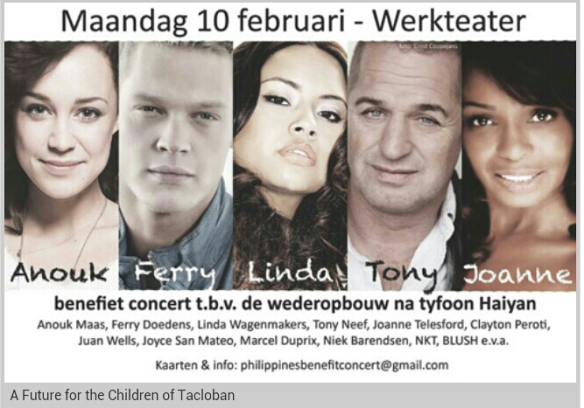 Many of the performers were Quirante’s friends and colleagues from “Miss Saigon.” He said they were thankful to be given the opportunity to directly help Tacloban through their talents.

Linda Wagenmakers, who played the role of Kim in the Dutch version of Miss Saigon, said she used to work with a lot of Filipinos, some of which have become her friends, that’s why she feels connected to the Philippines.“There are people that lived through it. It is very important now, especially for the kids that they get to have a future. They have to go back and start their lives so I think that’s always a good reason to join [the concert],” she said.

Meanwhile the event’s hosts, theater actress Anouk Maas and Dutch actor Ferry Doedens, said they were at first nervous performing in the event but the crowd, particularly Filipinos, was a fun audience.

“We think it’s really important to do this for the people [in Tacloban]. You would do it for your own mother, your own brother, so why not other people?” said Maas.“I think it’s terrible what happened there and every little bit helps,” Doedens added.

Most of the audience had already donated through the national fundraising campaign Giro 555 which generated a total donation of more than P2 billion, but many still believe that a lot more is needed to be done to rebuild the lives of the victims.

“I felt really sad when I saw the devastation there. I was taking action to encourage everyone to donate money. It’s a country that does not have enough means to develop itself again. If we make sure that the money gets to the right people then we will help,” said Dutch TV presenter Koen Frederik Smit.