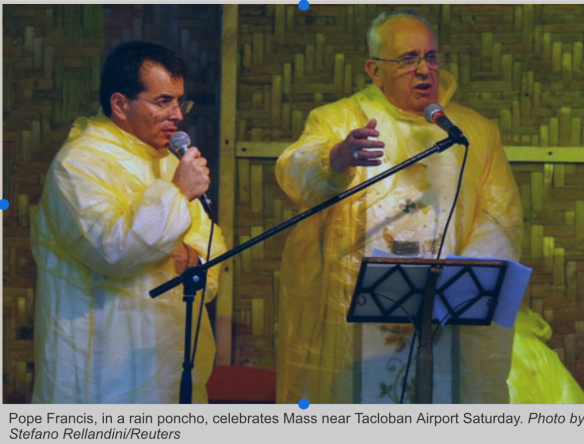 MANILA – Pope Francis flew to Tacloban City, Leyte on Saturday to celebrate Mass with thousands of survivors of super typhoon Yolanda and give them hope that all is not lost despite the tragedy.

Light rains, accompanied by strong winds, brought about by typhoon Amang did not dampen the spirit of the Pope, who is now on the third day of his visit to the Philippines, to hold Mass at the makeshift stage at the Tacloban Airport.

“When I saw from Rome the catastrophe, I felt that I had to be here,” the Pope said in his homily, in Spanish. “And on those very days, I decided to come here. I am here to be with you. A little bit late, I have to say, but I am here.”

Yolanda, the strongest and deadliest typhoon to hit land, struck the Philippines on November 8, 2013.

It claimed the lives of at least 6,300 people and injured 28,000 others. About 1,000 individuals remain missing over a year after the onslaught of the super typhoon.

Yolanda also came as the country was still reeling from the devastating effects of the magnitude 7.2 earthquake in Bohol in October, and the siege of the Moro National Liberation Front (MNLF) in Zamboanga in September.

“‘Father,’ you might say to me, ‘I was let down because I lost so many things — my house, my livelihood — I have illness.’ It’s true if you would say that and I respect those sentiments,” Pope Francis said, addressing the thousands of Filipino faithful who braved the streets to hear his Mass.

“But Jesus there, nailed to the cross, from there, He does not let us down,” the Pope said, as some devotees started weeping openly while listening to the pontiff’s homily.

Most of the typhoon survivors might have, at one point in their lives, questioned the Lord why it was them who was struck by the tragedy, said the Pope.

Pope Francis did not attempt to offer any answers, admitting that he himself does not know how to respond to the question.

But he said the victims of the disaster must not lose hope and just continue to cling to the Lord.

“Many of you have asked the Lord, ‘Why, Lord?’ And to each of you to your heart, Christ responds from His heart upon the cross. I have no more words to say to you. Let us look to Christ. He is the Lord. He understands us because He underwent all the trials that we, that you, have experienced,” he said.

“In the moments when we have so much pain, when we no longer understand anything, all we can do is grab hold of her (Mary) hand firmly, and say ‘mom’ as a child says to her mother when he or she feels fear,” he added.

Pope Francis ended his homily by telling the crowd that they are not alone. They must strive to move forward together, he said.