I have posted the story about one family already but now that I am back in the States and am about to write about all the rest, I wanted to take a step back and tell you about the Tacloban I saw. Perhaps that will help paint a better picture as I start telling the other stories, and showing you the photographs I took.

The devastation is still literally breathtaking. Yes, compared to what I saw in December, there has indeed been some progress. But it has been molasses slow in a lot of the places, especially in the ones I visited. Sure, my mother’s neighborhood already has electricity (they got electricity back in March, a little over four months after the typhoon), but most of the households I went to still did not have any. Did I dare go there at dark? No way. So you will not see… 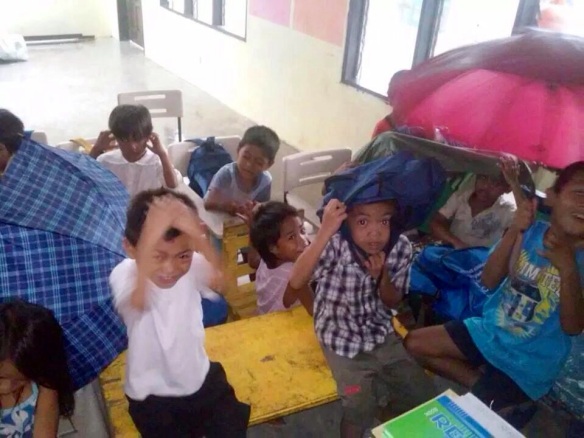 Sometimes stories can be very difficult to justify when your sources comes from the main stream. At times it can get very redundant and confusing that it losses it’s soul purpose in providing the truth.

In times like today, social media is just that, a source of main stream information. It has become part of our daily life that one can read a story, and it will come and go in a few days. Even if it is a huge disaster that will take a long time to recover, so many unfortunate events out there, it can be easily forgotten.

The big cities are still struggling to fight what is needed to be done, in essence for the forgotten ones, this has become almost a losing battle. The smaller barrios are now at the tipping point where once the shelters provided were meant to be temporary is becoming permanent. Many…

One Tough Nut to Crack

I was inching my way to row 14 when, all of a sudden, a wayward conversation drew my attention.

A turbulent 30 minutes later, we landed in the Daniel Z. Romualdez Airport. 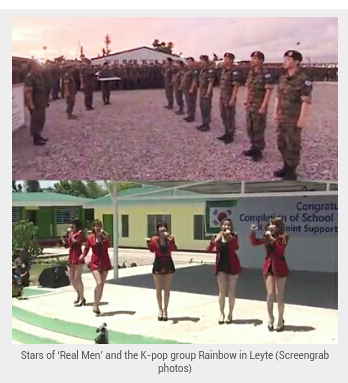 The stars of the Korean TV show “Real Men” spent their last days in Leyte, Philippines, interacting and playing games with Filipinos.

As shown in the fourth episode of the TV show that aired on July 20, Super Junior M’s Henry Lau, ZE:A’s Hyungsik, actor Kim Soo Ro, singer K.Will, Park Gun-hyung, Chung Jung-myung, Seo Kyung-suk and Sam Hammington wrapped up their tour of duty in the region with the rehabilitation of the Naga-Naga Elementary School in Palo, Leyte.

Joint Philippine and South Korean forces, as with the show’s cast, helped rebuild the school, which was damaged by Typhoon “Yolanda” back in November.

A mini-program was staged as part of the celebration.

The audience, especially the “Real Men” cast, were surprised and delighted when K-pop girl group Rainbow appeared on stage.

Korean and Filipino soldiers, together with members of Rainbow participated in several games including tug-of-war (won by Filipino soldiers), a sack race and Korean wresting, or ssireum.Locals expressed gratefulness to the cast for their effort via a thank-you note written on a blackboard inside the newly refurbishedschool.

It read: “Dear Korean Angels, We are blessed to have you. This would not be possible without your help. You give us encouragement, love, and moral support. Soon you will be leaving us. You’ll be flying home but the legacy you leave shall be imprinted in every soul of the Naga-Naga Elem. pupils, teachers and parents. Thank you very much and more power! Kamsahamnida.”

MANILA – You just can’t keep a Filipino down.

Months after “Yolanda” struck, a YouTube user has uploaded a video of the survivors of one of the worst natural disasters to hit the country breaking out in dance to “Happy” from the movie “Despicable Me 2.”

The new video, uploaded on Tuesday, is filled to the brim with children and volunteers clapping around the jubilant, toe-tapping track by Pharrell Williams, amid the destruction brought about by the super typhoon.

As of writing, the video titled “Pharrell Williams – Happy – Philippines after Typhoon Haiyan” has almost 10,000 views and counting, with several users praising the strength of the survivors.

Directed and uploaded by Quentin Musset, the video was a joint project with the United Nations Development Programme Philippines and was filmed in the city of Tacloban. 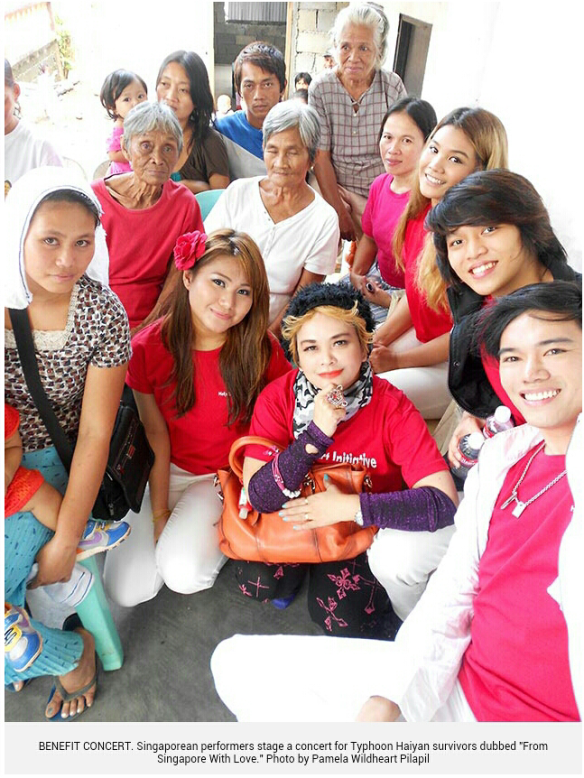 MANILA, Philippines – Singaporean performer Miranda Ho Sze-Yi had second thoughts in joining a group of artists who went to Leyte and Samar last January. The group staged a free two-day benefit concert for Typhoon Haiyan survivors dubbed “From Singapore with love.”I was a bit hesitant on going, I am not going to lie,” Sze-Yi said.

The scale of death and destruction flashed on television and posted in the Internet a thousand times must have scared her. She is not used to seeing children, women, and families crammed into endless rows of rain-soaked makeshift shelters. She lives in a country with no homeless residents and where homes are built to withstand disasters.

But when she met the people in the cities of Ormoc, Tacloban, and Borongan, she realized she made the right decision to come and perform for the survivors. She was not only able to help but also found new friends.”The locals were so welcoming and enthusiastic! Sometimes I even forgot where we were and had fun with them, just like old friends,” Ho Sze-Yi recalled her experience.

Adopt a family, build a house

Hundreds of survivors showed up to watch the performances that gave them a brief respite from the impact of the tragedy. Directed by the award-winning Singaporean composer Erick Guansing, the performances showcased various music styles including rock, pop, ballad, and hip hop.

“We were so glad that this simple act of kindness through the power of music, was able to contribute substantially not only to the material and tangible rehabilitation…but most significantly, for a moment, we were able to entertain them,” said MaryJane Salomon, founder of Help Direct Initiative (HDI), which organized the concert.Part of the event was the distribution of more than a thousand mattresses donated by the Singapore Red Cross. 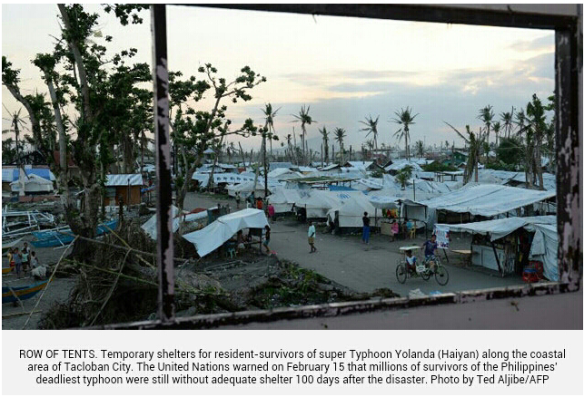 HDI also launched a campaign called “Adopt A Family and Build A House for P20,000 or 600 SGD.” Every house, which will be built by local carpenters following building standards, will be named after the benefactor.”It is our goal to make every survivor feel that people outside of the Philippines, such as the Singaporeans, understand and will continue to provide support, when its needed in more ways than one,” Salomon said.Months after the deadliest typhoon hit the Philippines, the “needs remain enormous,” according to the United Nations. It urged government and aid agencies to find ways to provide shelter for the homeless.

Helping a neighbor in need

This March, a 30-minute documentary film about the concert and the plight of Haiyan survivors will be aired in Singapore to help raise funds for recovery efforts.

The documentary is directed by Ian White and co-produced by Gin Kai Chan, one of Singapore’s prominent filmmakers.

Chan, who also visited Leyte and Samar, said he was inspired to see how strong the spirit of the Filipino people is in the face of massive destruction and loss of life.”The storm might have destroyed houses, but solidarity within families, and the unity of the community grew. It may have brought about hunger and sicknesses, but it also strengthened the resolve and resilience of the people,” Chan said.”I may have come to provide assistance, but I left with a heart that is humbled, and that has learnt so much from you. As a Singaporean, a neighbor that is not far from you, I will carry on doing my utmost to help you,” he added. – Rappler.com 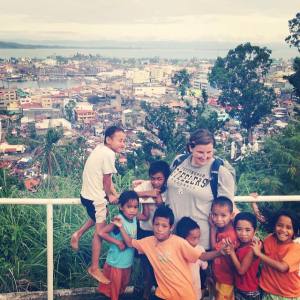 As I’m driving in a van full of people on my way to the airport, leaving Cebu Philippines, I breath in the fresh stench of the city. It’s grown to be a comforting smell. Depending where you are, you may get a whiff of sewage, fish, motor oil, or a certain ocean breeze fragrance. The combo of smells places me in the country that stole a chunk of my heart (I don’t know how to accurately explain it without sounding cheesy.) Filipinos showed me resilience, sacrificial hospitality, smiles in the midst of devastation, and a subtle yearning for encouragement. I made hilarious and kind-hearted friends every where I traveled. The city of Tacloban (destroyed by Typhoon Yolanda) is making huge strives towards rebuilding. It will be years. The government in charge of handing out relief is hugely corrupt. But, in the one month I was in the Philippines, I saw…

After much anticipation and preparation it was finally time to make our move to the Philippines. We had two flights and an 8 hour layover in Singapore’s Chiangi Airport between us and Manila, all of which ran very smooth despite the lack of sleep! We arrived in Manila at 6am after almost 24 hours in transit and proceeded to the immigration desk.

Unsure of what the immigration officer would say to our plan to stay for 7 weeks (instead of the standard 30 days) we approached the desk and were unexpectedly greeted with a smile as she took our documents. As she read through our immigration cards she looked up and asked where we were staying and the reason for our trip. After giving her the details of the organisation she asked us to wait whilst she spoke to her supervisor. She returned after a short while and informed us that…

This is the company we will be working with in Tacloban and some information on their efforts.

Super Typhoon Haiyan, locally known as Yolanda, was one of the strongest storms ever to make landfall. The storm has displaced more than 4 million people, affected 13 million, and killed over 4,000.

We’re currently working in close partnership with local Filipino organisations to deliver relief to the hardest hit areas. As we support local relief efforts we’re also assessing how we can best help with the huge need for longer-term reconstruction and recovery.

Our early focus on supporting local groups, and our careful consideration of communities long-term needs are essential to our proven model of supporting survivor-directed, sustainable recovery. Recovery from Haiyian will take years, and, with your support, we’ll be there every step of the way. 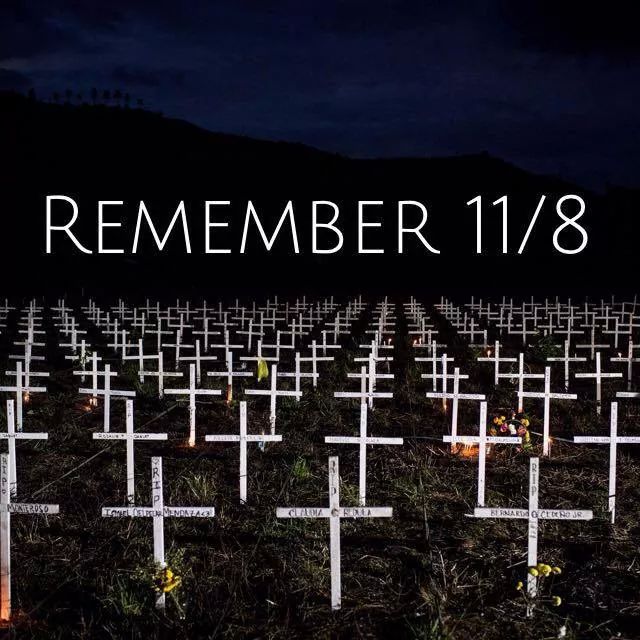 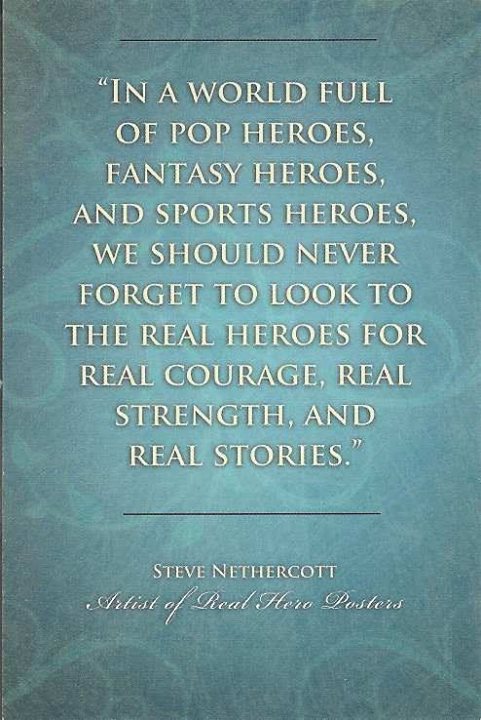